A few days ago I woke up to my cell phone ringing and it was Mr. Tanaka on the other end.  He said to my surprise, “Peter, you have today off.”  I said thanked him and hung up.  I was not expecting that because my last day off was 5 days ago.  The funny thing was that I actually thought to myself, “wait, isn’t it a little too early for another day off?”  That kind of tells you how I’ve gotten so accustomed to working all the time.  Anyhow, I didn’t question it and gladly took it.  It was a relaxing day for me and I got to do some post writing (the previous post) and some personal things done.  I was really enjoying it…

At around 5pm Mr. Tanaka calls me into the living room and tells me that Mr. Tohru Suzuki of Daiju-en asked (ordered) if I can help him at Shinpukuji Temple the following day.  Mr. Omura is the owner of the temple and keeps his very high quality Bonsai collection there and is one of Daiju-en’s best customers.  I’ve worked there before and said, “great! What will I be doing?”  Mr. Tanaka looked at me and said, “you’re going to help them build a large Kadomatsu.  It’s going to be very hard work.”  Then he added, “I’m staying here and it’s just you going.”  I laughed and said no problem.  In this post I’m going to tell you all about my day at the temple, what a Kadomatsu is, how we built the Kadomatsu and how a tough day turned out to be quite educational.  Don’t worry, I did all the heavy lifting so all you have to do is sit back and enjoy the pictures.  ;o) For those that know what a kadomatsu is, Shinpukuji Temple held a Guinness world record for tallest kadomatsu two years ago…

So what is this Kadomatsu?

In Japan, before the New Years, people like to make or purchase Kadomatsu to put in the entrance of their homes.  In my case, the kadomatsu was built for the entrance of Shinpukuji Temple.  Kadomatsu has a religious meaning to them but I’m not going to get  to much into the details of it.

Here is an animated picture to give you a better idea of what they look like.  They vary in sizes but consist mainly of three bamboo poles that are tied together at three different heights.  The different heights are suppose to represent Heaven, Man and Earth.  They are then placed in a bamboo container or at least a container dressed in bamboo.  At the base of the poles you will find flowering plum branches (ume) and pine branches.  Sometimes other things are added but the bamboo, ume and pine are the three basic components.

Wondering around the Shinpukuji Temple grounds

The following morning, Mr Suzuki, Uch Sempai and myself arrived at the temple early and had a chance to roam around before the work began.  The following are some shots I took of the temples and surrounding grounds.  Shinpukuji Temple is on a small mountain that Mr. Omura’s family have lived on for many generations. 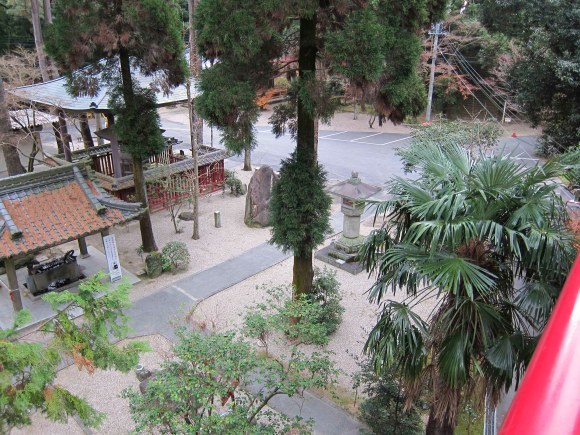 Here is the main entrance to the temple shot from a bridge I was standing on.  To the left of this picture are large stone steps that go up to the temple.  The two Kadomatsus we’re building will be placed at this entrance.

Here is one of the many shrines at the temple grounds.  I’m not sure how old some of the builds are but based on what the wood looks like, it’s probably over 100+ years old.

Got moss?  This whole area is all moss.  Pretty nice! 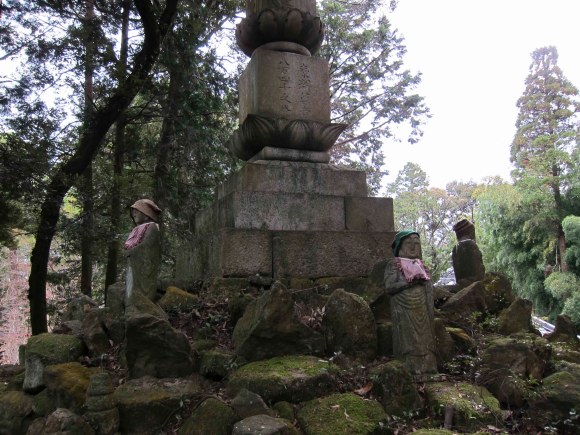 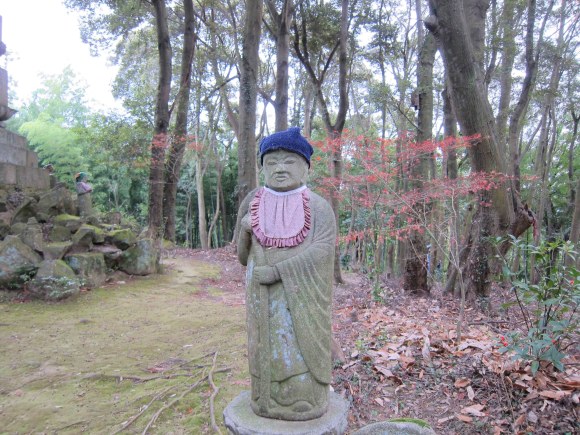 It can get pretty cold at night when you’re a stone statue.  All the statues had knit caps on them. 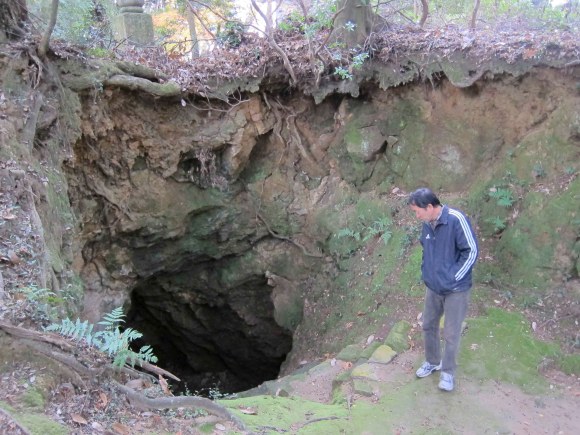 I was walking around with Mr. Suzuki and we stumbled around this huge hole in the ground.  Based on his reaction, this was the first time he’d seen it too.  There’s even steps going down.

After further inspection of the hole, it turns out it didn’t go very deep and deadened.  I wonder what it’s used for?  I was too scared to walk down into it so this is the only picture you’re going to get! 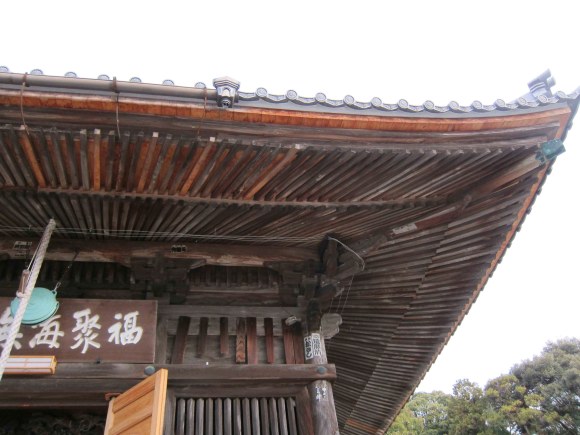 Here is an shot of the underside of the roof.  There are some amazing wood craftsmanship here.

There is a Bonsai museum next to the temple and you can see a little bit of the bonsais here.  The museum was closed that day so I couldn’t get in.  In the future, when I’m in there, I’ll take some pictures of the bonsai and share them with you.

Because the temple is at an elevated area and the food building is on another elevated area, this long bridge was built so that people wouldn’t have to climb up and down the grounds.

Time to build some Kadomatsu

Surrounding the temple is a forest of Cryptomeria and Timber bamboo.  We walked into the forest in search for the six pieces of bamboo we needed for our Kadomatsu.  I was then told that the bamboo poles needed to be at least 12 meters long (about 39 feet long)!  I thought to myself, “how are we going to get these poles out of this forest and how heavy are these poles going to be?”  Now I see why I got the previous day off…

Here’s a shot of one of the grounds keeper looking for just the right one.  The poles needed to be as straight as possible.  This also gives you an idea of how big the bamboo poles are.  These are the biggest bamboo I’be ever seen. 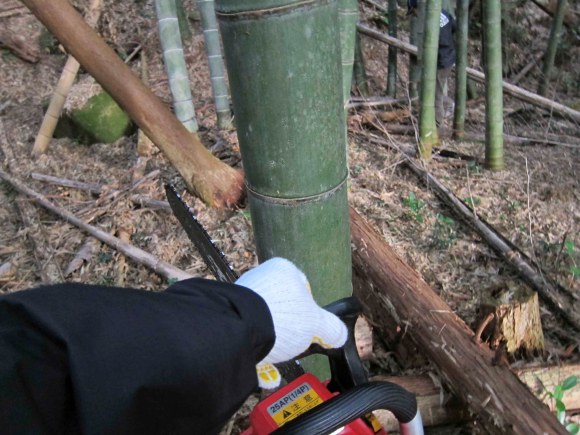 Once we found the right one, out came the chainsaw.  I don’t have any pictures of the actual cutting or of us pulling the poles out of the grove because I was the one doing it.

It was very interesting how bamboo is harvested.  One person had the chainsaw and one or two people will hold the bamboo.  The chainsaw man will start to cut  it and it was the holders job to lightly pull up so that the weight of the bamboo wouldn’t bog the chainsaw down.  Once the cut was made, Uch Sempai and I would both hug the trunk and on the count of three pick it up and set it down off of it’s base.  Since the grove was dense and all the foliage is on top, the bamboo can’t fall over like a typical tree that is being cut down.  The bottom of the bamboo had to be dragged in an angle to slowly bring the top of the tree down with it.  Guess who was doing the dragging?  The youngest backs in the group that’s who!  Once the bamboo was almost horizontal, they measured out 12 meters and cut the tops off.  The tops had to have been another 10 meters long.  These things were tall!

This was the best picture I could get of me and Uch Sempai carrying these beams out of the grove and up hill for about 80 meters, 80 meters on level ground then downhill another 50 meters.  That was the most difficult part of the day.  Each beam had to have weighed about 100 kg (220 lb).  I’m surprised I was able to pull out my camera and take this shot while we were walking uphill.  I thought I was going to die when we dropped the first one 210 meters away.  Good news though was that halfway through more helpers came so I only had to carry three of them with Uch Sempai. 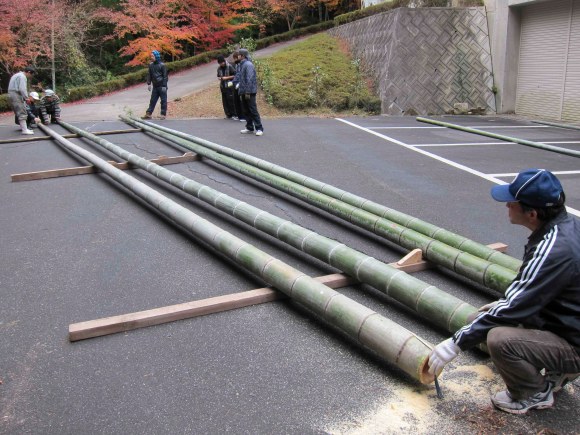 Here’s the bamboo together.  Notice how steep that hill is in the back? 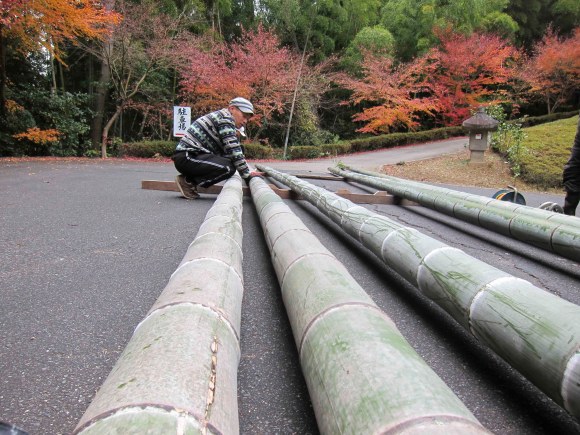 Here’s me and Uch Sempai holding the poles while the boss was deciding where the front of the poles should be.

Here they’re using a massive saw to cut the ends of the bamboo.

Once we got all the poles cut, we drilled holes in them and bolted them together in a couple of spots.  These guys are going nowhere!

Once we got these made, five of us picked them up and carried them another 100 meters down hill to the front of the temple. 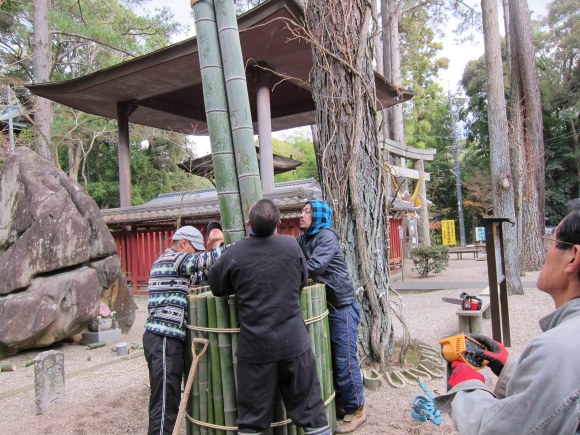 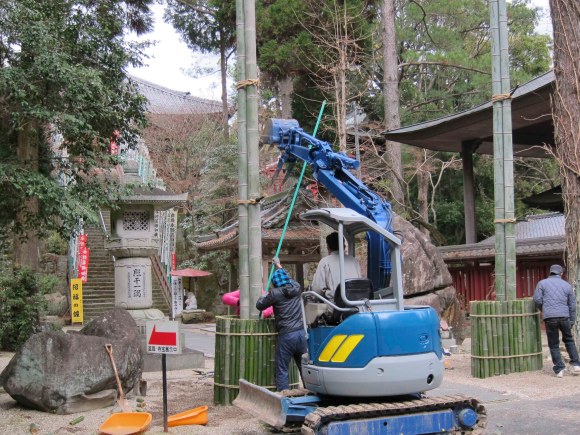 Slight adjustments with a excavator.

And there you have it!  That’s me standing next to the two Kadomatsu.  I can see why the temple held the record two years ago.  We didn’t place the ume or pine branches at that time but I’m sure it’s all there by now (that’s the easy part).  We just took care of the hard part.  After we finished here, we went back up the hill and make 6 more smaller versions that were about 1.25 meters tall.

Overall, the day turned out great.  I got to learn lots about how to harvest and cut bamboo, how to make Kadomatsu and a workout to boot.  How many people can say that they helped build one of the largest Kadomatsu in Japan?  I can!  Plus it makes for a great story.

Just another day in the, “Apprentice Life.”  By the way, it was about 9 C (48 F) outside and I was fighting a cold (not that I’m looking for sympathy or anything…) which brings me to an important point of being an apprentice.

Show No Weakness and Representing…

One thing I’ve learned in the past and during my apprenticeship is that I cannot show weakness.  No matter what I am doing, I always have to show that I am able to handle it.  No matter how tired I am, how cold, how hot or how frustrated, I have to keep a smile on my face and preserver.  Of course all of the crying during my private time is none of your business.  Hahaha.  All jokes aside though, I have learned that I have to be on top of everything because my performance doesn’t just represent me, but Aichi-en, Mr. Tanaka, the Bonsai community in the U.S. as well as everyone thats supported me.  Asians have a tendency not to judge a person directly, but based on his or her surroundings and friends.  If I fail, the blame doesn’t go to me alone.  It goes to everyone and everywhere that is associated with me (only a little pressure).

After we finished working at the temple, Mr. Suzuki turned to me and asked if I was tired?  I looked at him with a smile on my face and said, “No problem,” with a thumbs up (notice that I didn’t say yes or no?  A “no” answer means I’d be lying to Mr. Suzuki and a “yes” answer would show weakness.  My answer purely told him that I could handle it).  He laughed with a surprise look on his face and walked away shaking his head.  In that instant there, I made sure that the next time Mr. Suzuki mentions me to other people, he’s going to say, “Peter is an American who studied Bonsai under Boon Manakitivipart, then came to Japan to study at Aichi-en under Junichiro Tanaka who studied under Me at Daiju-en, is on top of his game.”  Representing…

Thanks for supervising the work  ;o)

23 thoughts on “Kadomatsu at Shinpukuji Temple”