Do any of you remember this tree?  If so, great memory!  This was one of the first Black Pines I worked on here at Aichien.  I worked on this tree back in April and the post that went with it was on my old blog site.  Recently I worked on it again so I thought I would repost the old post here and show you the recent work right after. Enjoy!

This is the second Black Pine that I was told to wire and style.  First thing to do was to pull the old needles and some of the new needles.  The strong areas I pulled the old and the new down to only three pairs of needles.  On medium areas, I left four pairs and on the weaker areas, I left five pairs.  (In California, I normally leave more needles overall.  In Nagoya, more is pulled, though one day back in California I’d like to see the results of pulling more needles.)

Here is a shot of the tree after the needles were pulled.  Afterwards I sat there looking at the tree for awhile and Mr. Tanaka says, “Start working!  Studying the tree is important, but work and study at the same time!”  I quickly got my tools and started to wire and cut the tree.

One of the first things that I wanted to do with the tree was make it shorter.  I consulted Mr. Tanaka and he agreed. 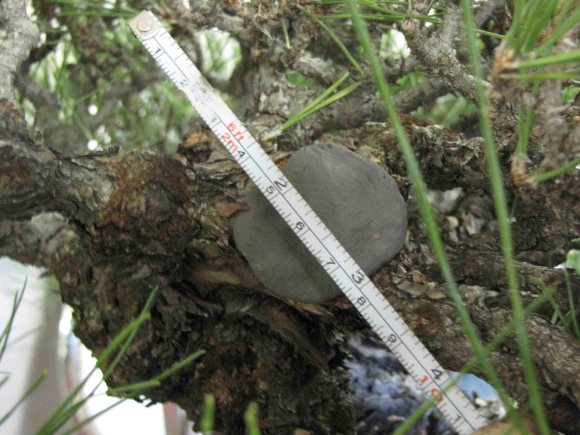 This is to give you an idea of how thick of a branch the apex was. 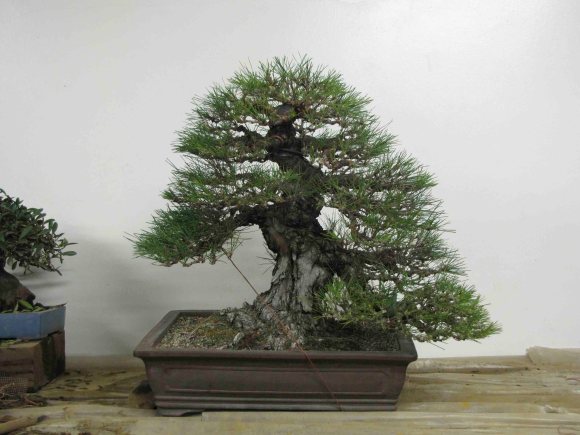 Here is what the tree looks like after I finished.

Some of the things that I did was bend many of the branches down.  Because this was my first time really styling a tree on my own, I wasn’t quite sure how Mr. Tanaka wanted me to cut the tree.  I have my own methods, but didn’t know if Mr. Tanaka would be happy with them.  I ended up only cutting some small branches and kept most of everything.  I figured that this way, Mr. Tanaka can always cut branches off as oppose to needing a branch that I cut off.  You can’t see it in the picture, but there is a foot long bar in the back of the tree.  I used it to pull the main branch on the right, back.

After I finished the work, I told Mr. Tanaka and he sat down and looked at the tree.  He told me to take the picture of my work, then he’s going to make some corrections. 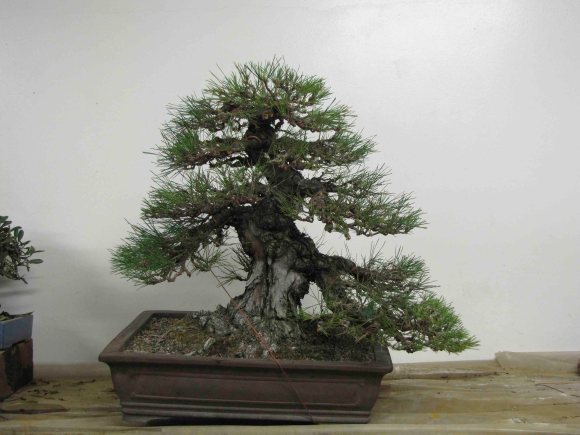 Here is the tree after Mr. Tanaka’s adjustments 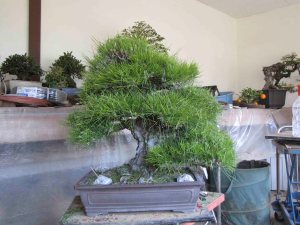 As I watched Mr. Tanaka work, I stood behind him and started to take notes on my notepad.  Here are some key things that I saw him do.

After Mr. Tanaka finished, we talked about what he did and what I learned.  Watching him work, gave me a good idea of his styling and tree training characteristics.  The structure of the tree really came out nice after he adjusted everything.  I hope to apply what I learned today to future trees I work on.

Note: This tree is by no means, “show ready.”  This is the work that is done during the developing stages.  Branches still need to be develop and branches left on the tree now, may be cut in the future.  One thing I’ve learned early on is that Bonsai takes many years to develop.  The whole idea of, “instant bonsai,” is not how real bonsai is developed and is mainly used as an entertainment tool during demonstrations.  When trees are put into shows here in Japan, they are worked on for many years in preparation for the show. 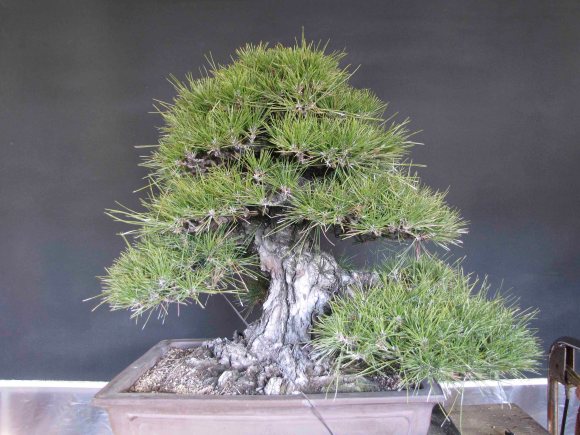 Here is what the tree looks like now.  In June, the tree was de-candled and pretty much looked just like it did after I wired it the first time in April.  The Meifu-ten show is coming up this weekend and Mr. Tanaka and I were walking the yard looking for trees that he wanted to sell.  He stopped at this one and said, clean this tree up and make it look nice for the sales area.  I felt excited that I was going to work on this tree again, but also a bit sad that it might be the last. 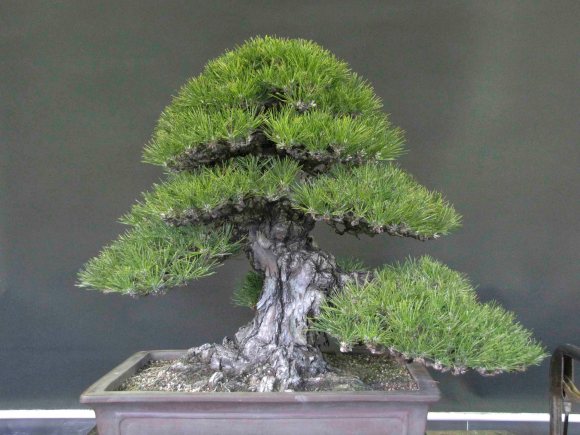 Here is the tree after I cleaned it up.

Preparing a tree for show or sale is much different then work done on developing a tree.  Since this tree was de-candled last June, the de-candled points had many candles growing out of them.  Normally at this time of year, we would go through the tree and pull off the old needles and thin out the multiple buds at the de-candled point to two.  If I did that to this tree, it was be about half as full.  To get this tree to look like this with the proper structure would take a couple of more years to develop.  Since this tree is going to the sales area, I kept the multiple candles so that the tree would looks much denser and ramified then it really is.  All I did was pull the brown old needles, clean up the pads, did some slight adjustments to the branches and added a few pieces of extra wire to move a few branches around.  The tree took me about 4 hours to clean up and prep.

Overall the tree came out pretty good.  If I was going to put it in a show, I’d probably make more refined tweaks to the branches and tilt the tree to the right a bit.  Did you notice that the apex centerline is on the left side of the trunk centerline?  That would be okay if the main branch was on the left side but it’s not. I thought about adjusting the foliage but the top of the trunk itself is somewhat leaning to the left as well.  Since I’m not repotting the tree at this point, I can’t make the adjustment.

I showed the tree to Mr. Tanaka and he was satisfied with the work and the tree was placed with the other trees going to sale.  I showed Mr. Tanaka the photo of the tree and told him I was surprised as to how quickly the tree started to look good since I did cut the apex off only 7 months ago and the tree itself was so sparse after I wired it  Mr. Tanaka looked at me jokingly and said, “did you forget where you’re apprenticing?” (My face turned red and we both started laughing)

I hope Mr. Tanaka is able to sell the tree and make some good money.  On the other hand, I hope he doesn’t so that I can continue to develop the tree (sshhhh don’t tell him that!).

P.S. If you are actively reading this blog, I would appreciate it if you subscribe to it (right column of the blog).  This is one of the best ways for me to know how many people are reading.  Thanks!