First off, I apologize for the last email blast about Mr. Tanaka’s work.  I accidentally hit the publish key.  Sorry about the inconvenience.  The good news is that you now know there’s going to be a post about that very soon. ;o) 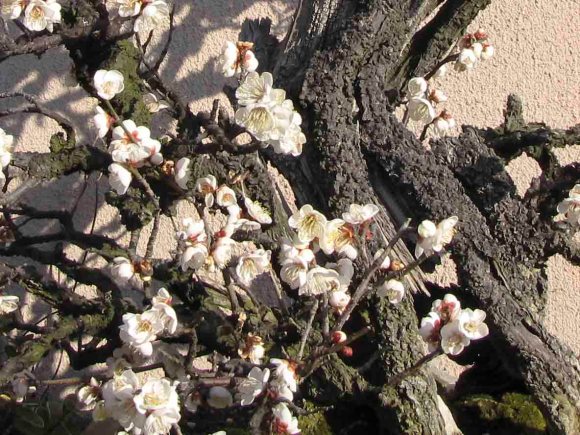 The wait is over! Last year, I’ve gotten many request to write a post about Japanese Flowering Plum and here it is!  What better time to talk about them then when they are blooming here in Japan.  For this post, I’m going to keep things simple and talk general care and growth habits.  I’ve also gone around the yard and took photos of the different styles of flower they produce and will share them with you as well.  Since I plan on being in Japan for many more years to come, I will continue to post more about Flowering Plum as I work with them more and more.

The first answer people would normally give is because of the flowers.  I would have to agree that the flowers can be very pretty and plum is one of the few trees that bloom in the Winter.  Though we all do like the flowers, they do have other characteristics that we can enjoy as well.  Old plum trees tend to have deadwood or hollowed trunks.  The bark on the trunks also can get thick and crackly.  Seeing the old ones bloom in Winter gives a sense of conflict and harmony at the same time.  At first glance, it’s somewhat strange that a old partially dead rugged tree is producing such delicate looking flowers.  As you look deeper into the tree, you start to realize how even a rough looking tree can be so beautiful as well.  At least, that’s how I feel about them… 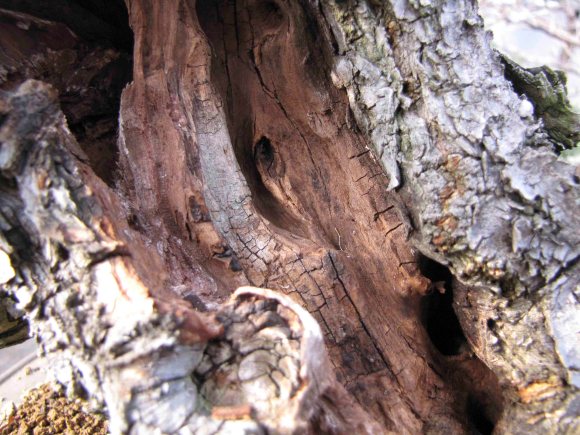 Here is an example of the dead wood and rough bark a Flowering Plum can produce.  The reason why old plum trees tend to have dead wood or hollowed trunks is because they can be very susceptible to fungus attacks.  Once fungus kills off a section of the tree, the wood starts to dry and rots very easily.  This is so much the case that if a plum tree trunk is whole, many will see them as a young tree.

Before we start developing Flowering Plum, we have to understand their growth characteristics.  Once we understand it, we can then come up with a stradegy to work with them and create great Bonsai.

*Note: Flower buds will only grow on that year’s new growth.  The tree normally doesn’t back bud on old wood.*

Before I get into the flower portion of the tree, there are some terminology that are important to know.  This way, I can refer to specific parts of the flower and you’ll know what I’m talking about.  Plus, it probably doesn’t hurt to know a bit of plant biology while we’re at it.  Check out the picture below: 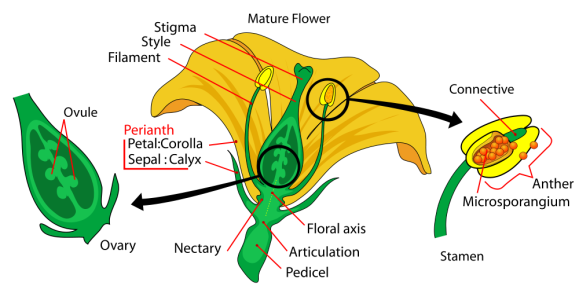 This picture is courtesy of Wikipedia.com

As you may already know, there are many different types of flowers that a Flowering Plum can produce. There are two basic categories when it comes to the flowers.  There are ones that have only five pedals and those that have more then five pedals creating more of a ruffled look.  Some flowers are natural and some are hybrids.  Here are some photos of the different flowers we have at Aichi-en. 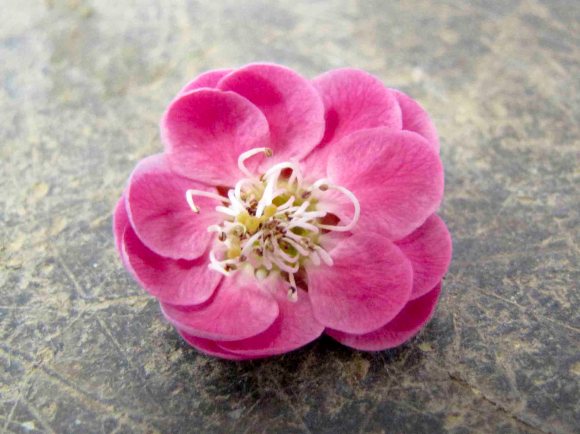 This flower really caught my eye!  Nice clean multiple pedals.  Very pretty.  The filament is white on this one.  Usually, they tend to have a tint of the pedals color. 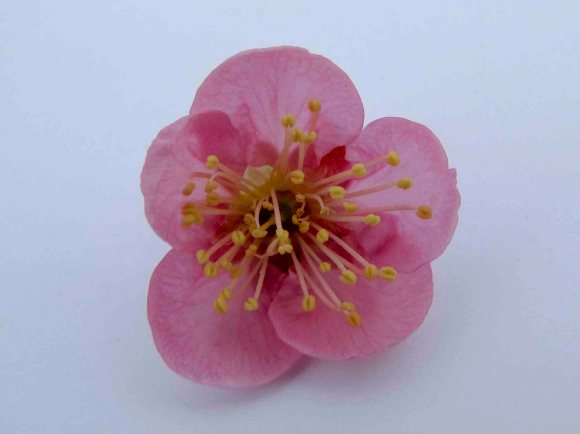 Here is an example of the five pedal flowers.  Simply beautiful! 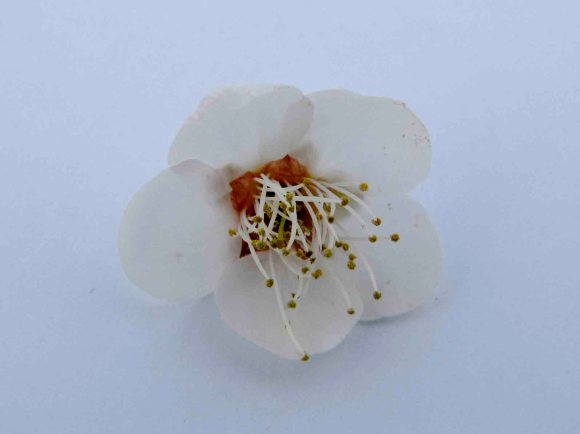 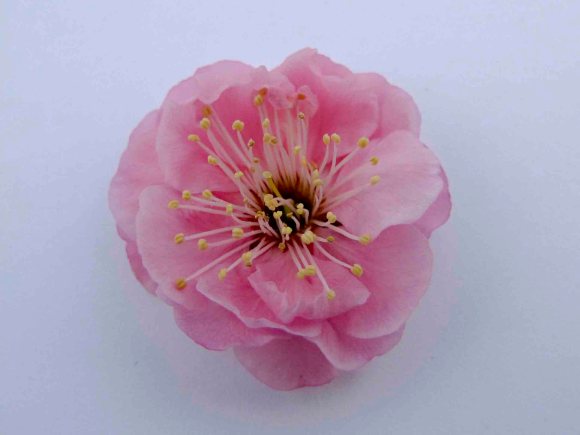 Here is a pink flower.  The pedals on this one is a bit more wavy as well. 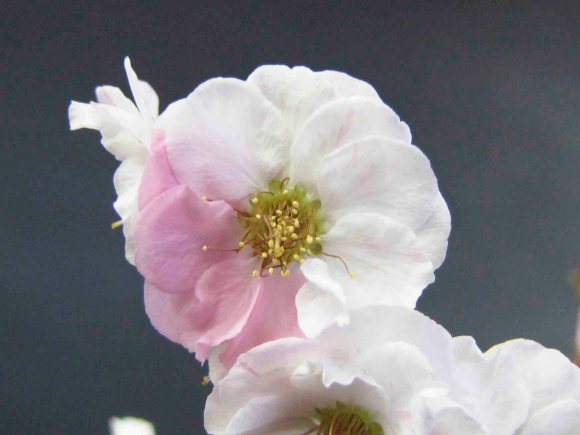 Here’s a strange mix of colors!  Half is pink and half is white! 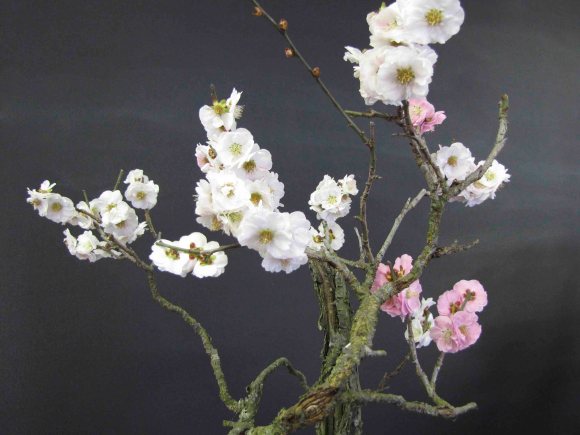 Here is a shot of the tree with the different colors.  The flowers are either all white, all pink, or half pink and half white. 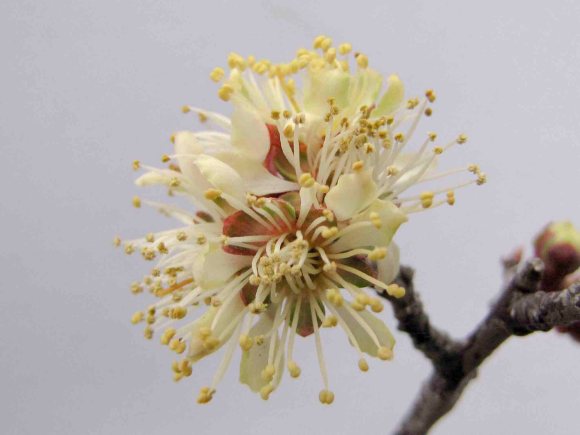 Mr. Tanaka pointed this one out and said that it’s a rare flower variety.  The pedals are very small and the filaments are the dominating part of the flower.  He added that these varieties are much weaker then the other Flowering Plums.

I Have a Flowering Plum But it Doesn’t Flower. Why?

In Japan, most Flowering Plums are grafted early on in life.  Since people want the flowers, they would take a branch that is know to flower from another tree and graft it to a young root stock.  This way, the tree will immediately start blooming.  Unlike other flowering trees that may take 1-15 years before they bloom, Flowering Plum is much more unpredictable.  So far, it seems that a tree will start to bloom somewhere between 20 year and 100+ years!  I know this to be true because we have a Flowering plum that was grown from seed in the yard that is over 100 years old and one of the lower branches still won’t bloom.  This unpredictability is the reason why people tend to graft instead.

Here are some of the different things that are done to Flowering Plum during the year:

After the tree finishes blooming (Spring), the branches can be cut back.  This is also the time to repot the tree if needed.  Flowering Plum likes a lot of water so be sure to use a soil mix that holds a lot of water.  Here at Aichien, we use 70-80 percent Akadama in the soil mix for Plums.

After the leaves harden off in May, the tree can be cut back again if needed.

May is the time when the tree can be wired as well.  Aluminum wire is normally used to wire ume but I’ve seen people use copper as well.  Flowering Plum branches can be very brittle so be careful when bending them.  The branch almost gives you no warning before they break.

The leaves can be defoliated after they have hardened of (May) as well.  This technique is used to force the tree to produce more leaf buds, thus producing more branches.  The downside is that there won’t be as many flower blooms in the Winter.

During the Fall and Winter, there isn’t much work on the tree other then spraying pesticides, watering and feeding the tree.

Usually when professionals spray fungicide/pesticides on a Flowering Plum, they don’t hold back.  Flowering Plums tend to get drenched during spraying.  This goes to show how easy they can be attacked by fungus/insects.

The Tricky Part About Cutting Back

Unlike other deciduous trees, you cannot cut back a Flowering Plum and expect it to back bud.  The tree will rarely backbud on old wood.  When cutting back, it’s all about cutting back to a leaf bud.  If you cut back to a point on the branch where there are no leaf buds, the entire branch will die off. 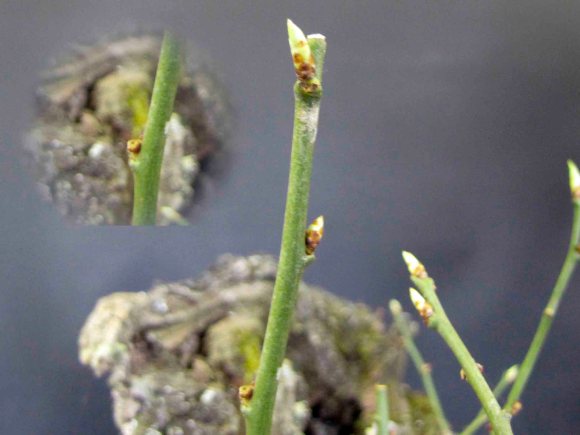 Fancy huh? ;o) Here is an example of a branch that has leaf buds on two of three nodes.  See how the first and second leaf buds are starting to elongate and grow.  Notice how there is no bud on the third node?  This node only had a flower bud during the Winter.  If a leaf bud didn’t already form on that third node, it almost never will.  If the cut was in between the second and third node, the branch will die back to the last branch intersection or leaf bud. 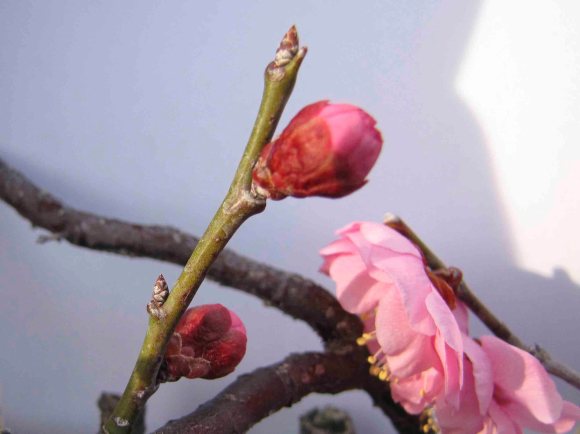 Here is another example of flower buds and leaf buds.  At any particular node, there can either be a leaf bud, 1-3 flower buds, or both.  This example shows that bud and leaf buds can grow anywhere on the new branch. 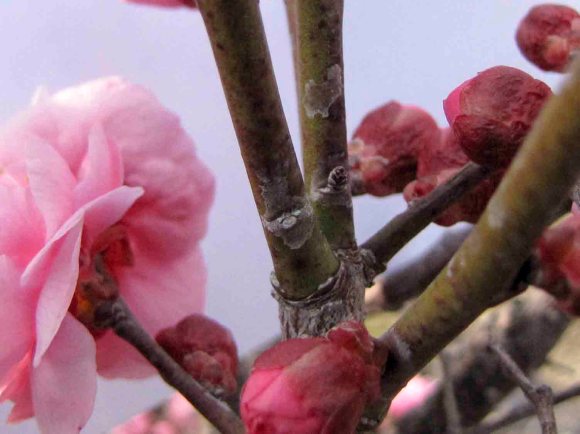 Here is another example of two new branches that grew from one point and their first nodes.  The first node on the right branch has a leaf bud whereas the first node of the left branch doesn’t. Either that bud was knocked off or it never developed.

As you can see from the three examples above, it is very important that we recognize what a leaf bud is before pruning our Flowering Plums.  Always cut back to a leaf bud. We will normally cut back to at least two leaf buds but depending on the circumstances, we may cut back to just one leaf bud.

After cutting the tree back, it’s always a good idea to seal the cuts with cut paste.  This will help keep the tree safe from fungus attacks.  If you plan on cutting multiple trees, be sure to clean your tools with alcohol to prevent the spread of disease from one tree to the next.

Air layering a Flowering Plum is almost impossible.  These trees will not air layer very easily.  It’s easier to approach graft roots instead.

Since Flowering Plum doesn’t normally back bud, they tend to get leggy after many years of growth.  That is where grafting comes to play.  When a Flowering Plum get’s too leggy, people will cut the new growth off the tree and graft it into the old wood.  The best time to graft is in February or September (Early Spring or early Fall). 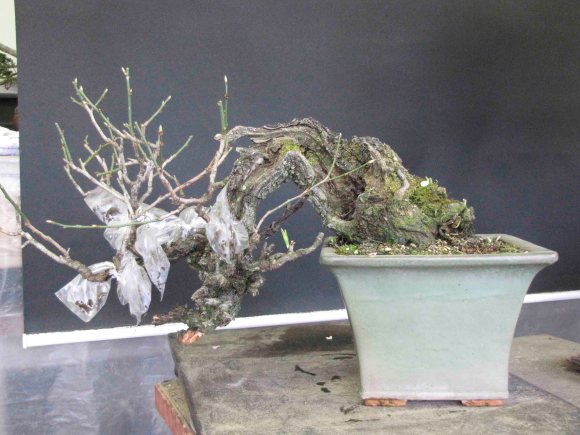 Here is a Flowering Plum that was grafted last February.  The grafts are regular side grafts.  This technique is used with many other trees in Bonsai. 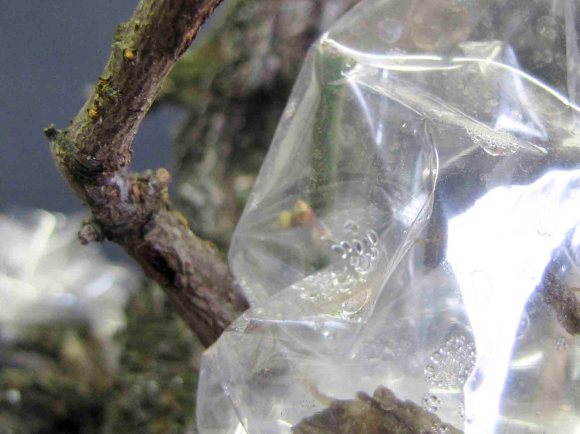 You can see the leaf bud on the grafted branch is now starting to push new growth.  That’s a good sign that the graft is going to take.  The scion used should have 1 or 2 leaf buds. 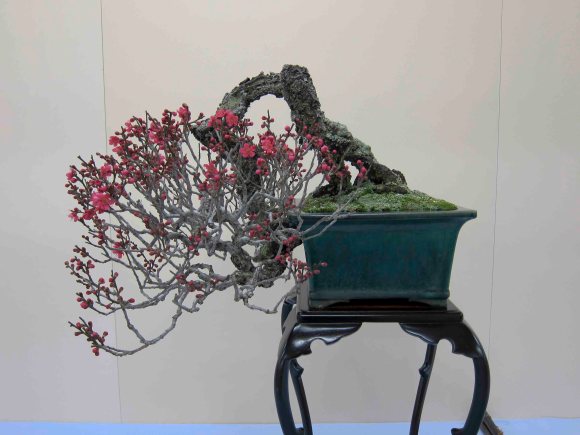 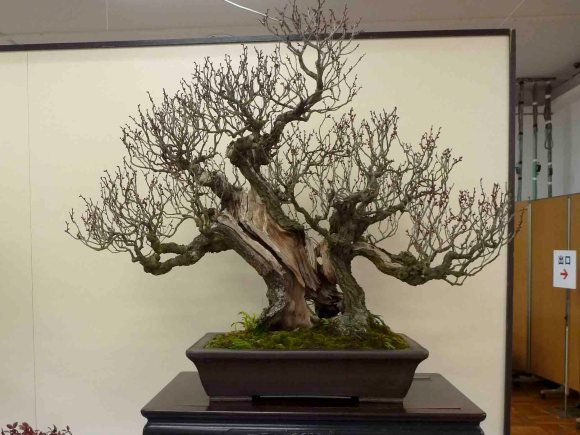 There ya go!  Some basic Flower Plum information to get you started.  As the year progresses and I take more photographs, I’ll write more post that focuses on the shapes, styles and pot selections for Flowering Plums.  I hope this helps you have a better understanding of plum basics and gives you an idea of when different types of work can be done to them at different times of years.  More to come in the future!

I hope that you noticed that both Flowering Plum Bonsai examples are in a glazed and clay pot.  Which is correct? or are both correct?  HUM???…  Think about it for a bit…  We’ll talk about that in the future.

Thanks for reading and learning with me!