Welcome to my Blog!

My name is Peter Tea and in this blog I will be sharing my experiences as a Bonsai Artist and Instructor.  I am located in San Jose, California and have been working and traveling all over the United States.  The purpose of this blog and website is to share some of the things I’ve learned in Bonsai and to keep in touch with the ever growing bonsai community.  I will post articles about my Bonsai projects along with helpful tips and techniques for those seeking information in improving their own skills.  On top of all that, I will also post about my Bonsai life and the inner workings of being a artist and instructor. 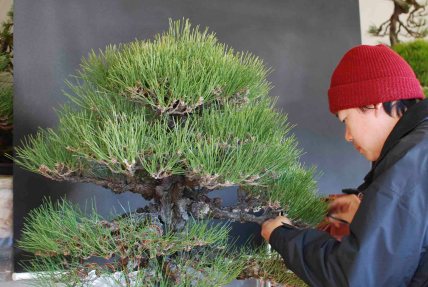 Working on a large Japanese Black Pine in Japan.

A Little History of Myself

I started learning about Bonsai in 2001.  I was an Automotive Technician at a Ford dealership for almost 10 years and Bonsai was my hobby on the side.  As I got more interested and deeper into the world of Bonsai, I found myself thinking about it all the time.  I joined the  Midori Bonsai Club in 2002 and become the president in 2007 and 2008.

Most of my Bonsai training came in 2003 when I met Boon Manakitivitpart of  BonsaiBoon.com.  I signed up for his Bonsai Intensive program after seeing him do a demonstration at the Sei Boku Kai Bonsai club meeting in San Mateo, California.  Once I visited his garden, I knew he was the person to study with in the United States.  After finishing his three year intensive program, I graduated and decided joined the Bay Island Bonsai in 2007.

In 2008 I started my own Bonsai business called Peter Tea Bonsai as a way for me to help educate the bonsai community, hone my teaching skills and make some extra money to fund my Bonsai hobby.  I held  workshops, study groups, demonstrations and sold bonsai related items.

In 2011 I decided to change career paths and traveled to Japan to study Bonsai full time under Mr. Junichiro Tanaka at Aichien Bonsai Garden.  I was an apprentice for over 2 years and was released in 2013 having completed my 5 year apprenticeship early.  With Mr. Tanaka’s blessing, I returned to the United States in 2013 ready to continue my business and work.

It’s been a heck of an experience so far and I look forward to new experiences and meeting new people in the future!